The Greek Orthodox Church of the Annunciation of Sacramento, California, founded in 1920, is one of the oldest Greek Orthodox parish between the San Francisco Bay Area and Salt Lake City. Our Parish is the Mother Church of the Greek Orthodox parishes in Stockton, Elk Grove, Redding, and Roseville, California, as well as Reno, Nevada. Having already built two houses of worship, the first in 1921 and then our present sanctuary and hall in 1952, we have recently completed building our new Annunciation Hellenic Center on our current site – which contains our hall, bookstore, classrooms, and parish office. An extremely active and large parish of more than 500 supporting families, we are part of the Metropolis of San Francisco, under His Eminence Metropolitan Gerasimos and of the Archdiocese of America under the jurisdiction of the Ecumenical Patriarchate of Constantinople.
Monument Honoring The Original Annunciation Church 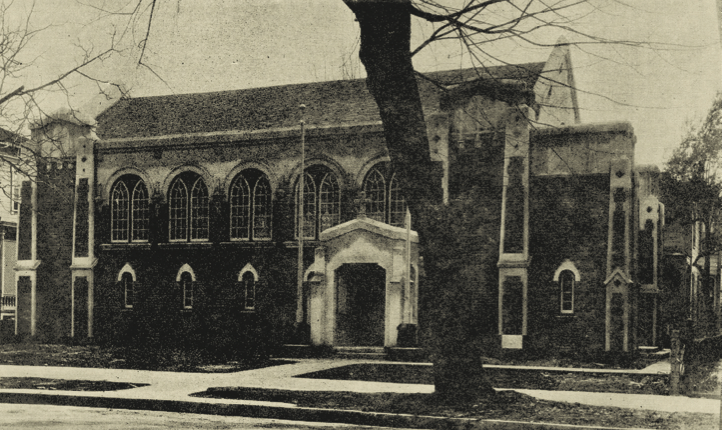 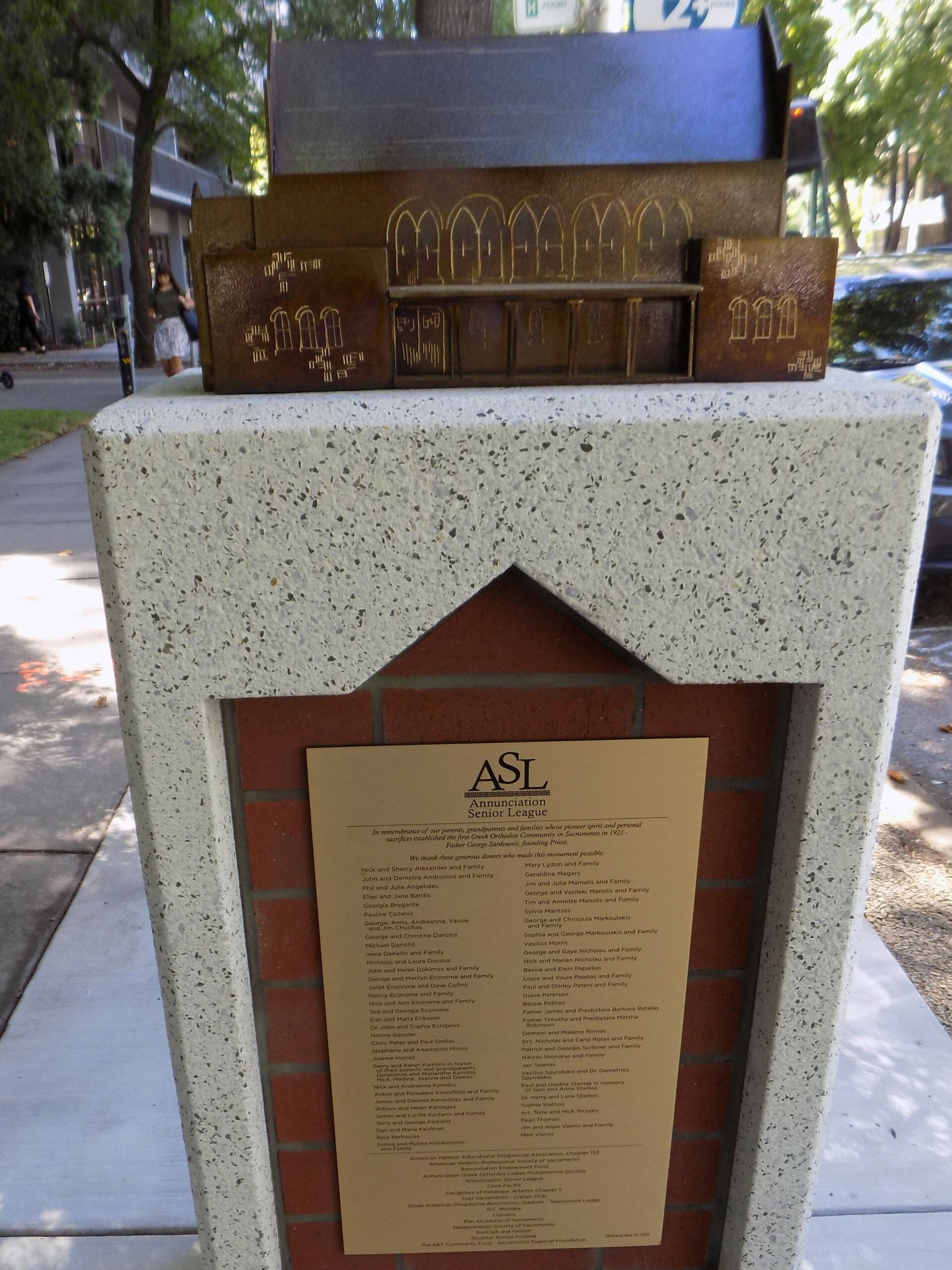 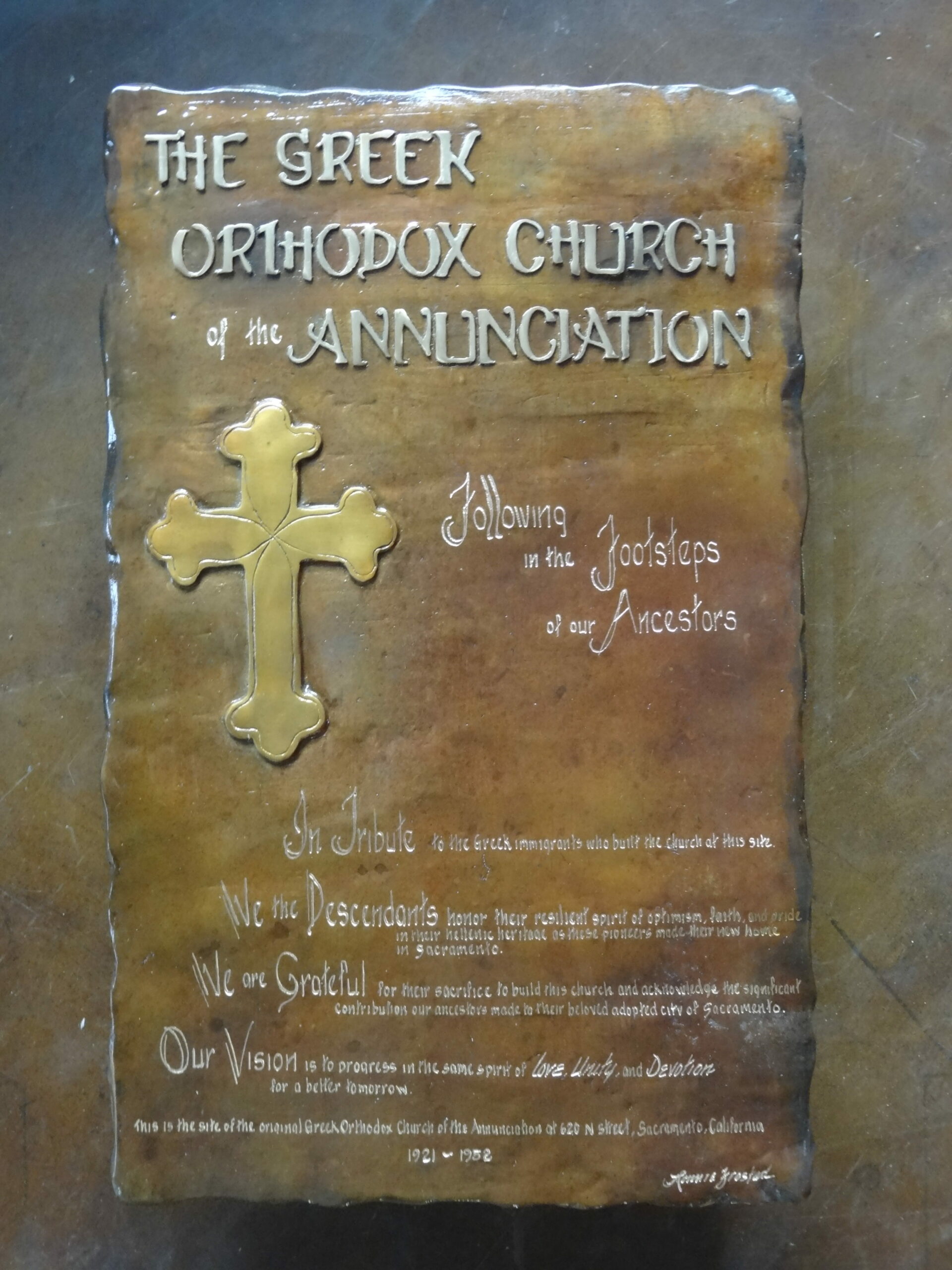 On June 23, 2019, the Annunciation Senior League dedicated a Monument honoring the site of the original Church of the Annunciation which is located at 620 N Street. Over 70 people in our community attended the dedication. The Monument “Following in the Footsteps of our Ancestors” honors the contribution by the Greek immigrant pioneers to the Sacramento Community.

Rev. Fathers James, Timothy, and Dino gave a lovely blessing. Sacramento City Councilman Steve Hansen spoke of the importance of understanding history which prepares us for the future. The Monument is installed on the south side of N Street and lays on a concrete square. Bronze footsteps lead to the base of a five-foot pedestal, upon which a bronze replica of the first Greek Orthodox Church of Sacramento sits. The footsteps signify “Following in the Footsteps of our Ancestors.” A large plaque commemorating the site is inlaid into one side of the pedestal. On the other side, there is a list of the generous donors that made the Monument possible. The Monument is important to our Greek community, visitors and all Sacramentans so they may learn of our Greek heritage here in Sacramento. Our ancestors came to this city not knowing the language, some without funds and some without skills. But they were industrious by nature. Some started shoe shine stands, others became tailors, bakers, cooks, or farmers. They later married, started families and bought homes. Because they felt the need to practice their Orthodox Faiith and keep the Greek community united, they raised money to build a church, despite financial hardships involved. They build this first Greek Orthodox Church at 620 N Street. The cost was $12,000. The first Diving Liturgy was celebrated on Christmas Day in 1921. George Sellon, the first architect for the State of California, was the architect.

How it all began

At an ASL meeting in late 2015, the concept of providing a tribute to our ancestors and the first Sacramento Greek Orthodox Church in the form of a plaque was introduced to the members. After some discussion, it was decided that the plaque should become a monument. A committee of ASL members, Georgia Econome, Julie Mamalis, Paul and Shirley Peters, Ellen Manolis Martin, and Terry Kastanis spearheaded this effort. Nick Docous and Richard Fuller of the Lionakis architectural firm in Sacramento also joined and generously volunteered their expertise and time. The committee located renowned bronze sculptor and artist, Ronnie Frostad who made the Lionakis design come to life. The plans (in microfiche format) of the original church were found in the archives of the City and County of Sacramento, The Center for Sacramento History. A to-scale model of the church was created to match the dimensions of the church, and from there, the bronze sculpture was created which sits atop the monument pedestal. When presenting the plans of the old church to Nick Docous, we were all surprised to learn it was designed in 1920 by George Sellon, the founding father of the Lionakis firm!

This beautiful monument resulted after about four years of planning, fundraising and construction. I hope you will plan to visit the Monument soon. I think you will be proud of our gift to the City of Sacramento. 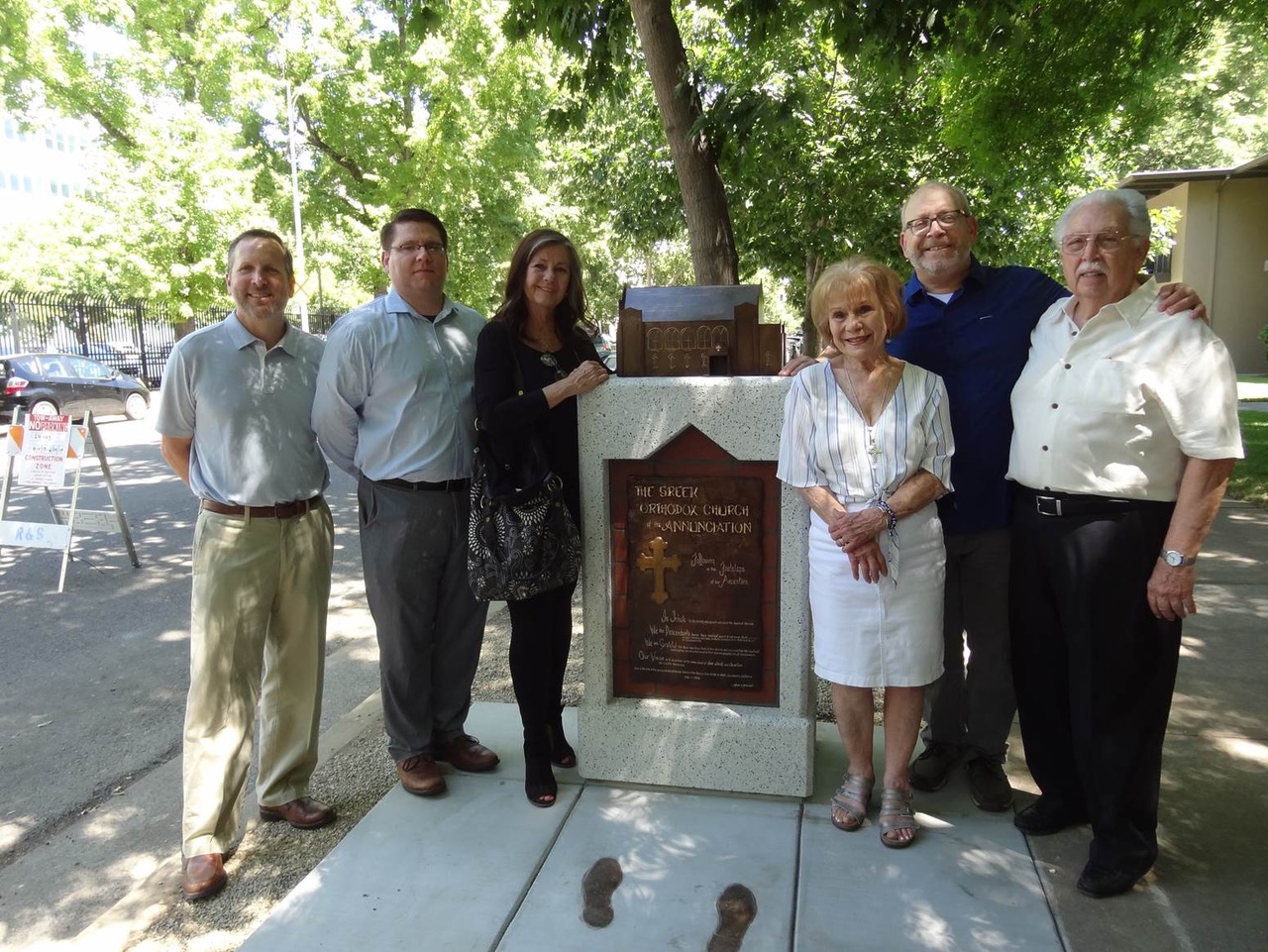